The deathclaw gauntlet is a weapon in Fallout: New Vegas.

The deathclaw gauntlet can successfully strike a total of about 2995 times from full condition before breaking.

The Lonesome Road DLC adds the ability to craft one of two unique variants:

The gauntlet has the same bulky design as the one in Fallout 3 as opposed to the smaller gauntlet in Fallout 4 that consist of only two claws attached to a brace. 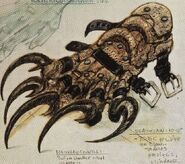