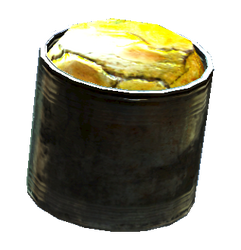 The Deathclaw Wellingham is a consumable item in Fallout 4.

Although the recipe is found under Cooking > Soup when crafting, it is, in fact, a souffle (noted as such in the game files) and would be baked. The item's artwork reflects this; however, the ingredients are an unlikely choice for such a dish.

This item can be crafted at a cooking station after completing The Devil's Due by delivering the pristine deathclaw egg to Wellingham.

The name is a reference to the culinary dish beef Wellington.

Retrieved from "https://fallout.fandom.com/wiki/Deathclaw_Wellingham?oldid=3502512"
Community content is available under CC-BY-SA unless otherwise noted.