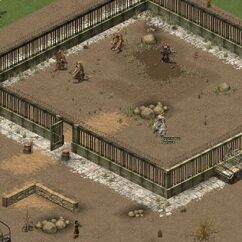 “Yes, my friends, you are free! Run, run like the wind! Rejoice! It is gods will that….SHRIEK!! Nooo. But, I'm a friend!”— Janet Badall

Deathclaw Liberation is a special encounter in Fallout Tactics.

In this encounter, you'll find a woman named Janet Badall standing outside a deathclaw enclosure containing five neutral deathclaws. Janet enthusiastically assumes the Warrior is, like she, an animal liberationist. After explaining her motives, she unlocks the enclosure gate and runs inside. At this point, the deathclaws become hostile and discover she has very few Hit Points. They then leave the enclosure and proceed to attack anything else on the map such as the Hummer or player characters.

This encounter is a reference to the famous primatologist, Jane Goodall.

Retrieved from "https://fallout.fandom.com/wiki/Deathclaw_Liberation?oldid=2796294"
Community content is available under CC-BY-SA unless otherwise noted.