Deathclaws are creatures found in Fallout 76.

The standard deathclaw, most commonly encountered in the Forest at a low level.

Matriarchs are the female leaders of the species.

They are ten levels higher than the deathclaw matriarchs and have higher stats.

Albino deathclaws are white in coloration.

The chameleon deathclaw is unique among other deathclaws, changing colors. When killed, its body remains the last color it was displaying.

Mythic deathclaws are the second strongest of all non-legendary deathclaws.

The glowing deathclaw is a variant of the deathclaw that has been affected by radiation.

Scorched deathclaws have been affected by the Scorched Plague. Each regular deathclaw variant has a corresponding Scorched variant with the same stats, abilities and items.

Prime deathclaws are encountered only during the Primal Cuts event, as the final boss if done in the Forest. 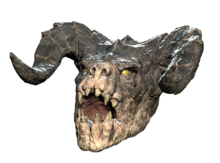 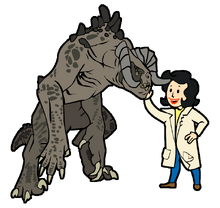 A deathclaw, as shown on the Project Paradise event icon 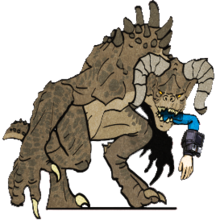 A deathclaw, as shown on the Arms Breaker perk (cut)