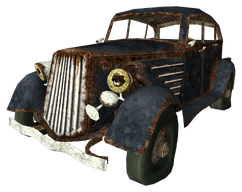 The death car is a vehicle in Fallout: New Vegas.

This car is at the heart of the novelty casino at the heart of Primm, still bearing the bullet holes from when the small-time crooks Vikki and Vance accidentally wound up in the middle of a shootout between cops and robbers in Plano, Texas. The shot-up car became the centerpiece of the Vikki and Vance Casino in Primm. It is still on display in 2281.[1]

An elegant pre-War full-size car with a bright red interior, the car was originally navy blue, but rust and the passage of centuries ruined the paint, as did the bullet holes that cover the driver's side doors. Being from the 1930s[2] and by extension gasoline-powered, it does not explode when shot by the player character.

The vehicle is on display at the Vikki and Vance Casino in Primm.

The death car appears only in Fallout: New Vegas.

The car is based on the 1934 Ford Deluxe V-8, the vehicle in which the real world Bonnie and Clyde were ambushed and killed. This car is currently on display in a museum located within Whiskey Pete's Hotel & Casino in Primm, Nevada.

On display in the Vikki and Vance Casino in Primm

Retrieved from "https://fallout.fandom.com/wiki/Death_car?oldid=3348706"
Community content is available under CC-BY-SA unless otherwise noted.