“Egads! We've just received word that William Peabody III, Esq., has been found murdered in his bedchambers. We must send our brightest detective and his trusty sidekick to solve this gruesome mystery!”

Death and Denial is a single-stage overseer quest in Fallout Shelter.

This quest is restricted to two dwellers only.

Reginald the Master Butler: Ask Reginald (the first man to be encountered) what he was doing the night of murder.

There are five radroaches in the next room to the right of Reginald.

Industrialist Rod Murphy & Trophy Wife Pricilla: Ask the woman in the red dress, part of the third group, what she was doing the night of the murder.

The next room to the left of Rod Murphy and Priscilla contains a mole rat broodmother with two mole rats.

Lady Elizabeth Worthington & Attendant Agatha: Ask the woman with the ghoul what she was doing at the time of the murder.

Commodore Tramiel & Niece Vicky: Proceed to ask the next group of people, the woman with the man next to her in a lab coat: "Turkish blade? You knew Peabody was stabbed to death?!"

Alvin Peabody the Son: Ask Peabody "You’re the only heir?"

The next room to the right of Alvin has a glowing radroach with three more radroaches. 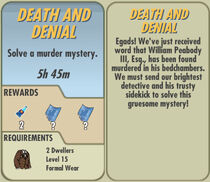 Rewards
Add an image to this gallery
Retrieved from "https://fallout.fandom.com/wiki/Death_and_Denial?oldid=3042525"
Community content is available under CC-BY-SA unless otherwise noted.