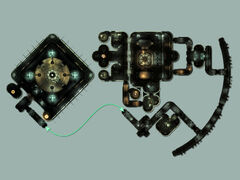 Map of the hub and Control

“Pretty obvious, wasn't it? They're putting on a big show, trying to scare us. Means we're getting under their skin. That's a good thing. Of course, now it looks like we've got a big Death Ray thing we need to take down before they blow up the whole damn planet. But it's nice to know we're having an effect, don't you think?”— Somah

The Death Ray hub is a location on board Mothership Zeta.

From the teleport point, follow the corridor to the left to reach a small room and use the terminal next to the door to open it. Within this room is a container and a support drone. The drone can be rewired and activated so that it targets enemies of the player.

To the right from the teleporter leads to a room symmetrical to the other small one, also containing a support drone. This drone may also be rewired and activated to provide useful support to the player. Several aliens will be coming from the only door left coming from this room. Follow this path to come into a large room. There is a healing archway, and to the right is a turret terminal that can be used to disable the nearby turret.

Continue following the fairly linear path. There are not many alien enemies,but lots of alien workers. The workers can be avoided or killed for bad Karma. The path eventually loops around to the Death Ray control door.

The Death Ray hub appears only in the Fallout 3 add-on Mothership Zeta.