“Pretty obvious, wasn't it? They're putting on a big show, trying to scare us. Means we're getting under their skin. That's a good thing. Of course, now it looks like we've got a big Death Ray thing we need to take down before they blow up the whole damn planet. But it's nice to know we're having an effect, don't you think?”— Somah

The Death Ray control is a location on board Mothership Zeta. It is a single large room serving as the control center for Zeta's death ray.

There are four power generators in the corners of the room, which have to be destroyed as a part of the quest This Galaxy Ain't Big Enough.... The Death Ray itself is visible beneath the glass floor. The room has two teleporters leading to the living quarters and the Death Ray hub area.

The Death Ray can be re-aimed at an unspecified target on Earth and fired multiple times, producing a spectacular mushroom cloud. Firing the Death Ray at Earth has no effect on Karma, or on the game itself. 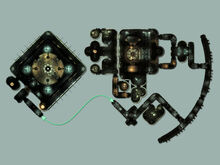 Map of the hub and Control 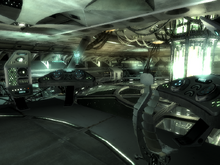