Dean Martin (June 7, 1917 – December 25, 1995) was an American singer, film actor and comedian. Martin's hit singles included "Memories Are Made of This," "That's Amore," "Everybody Loves Somebody," "Mambo Italiano," "Sway," "Volare" and "Ain't That a Kick in the Head?." Nicknamed the "King of Cool," he was one of the members of the "Rat Pack" and a major star in four areas of show business: concert stage/night clubs, recordings, motion pictures, and television.

"Ain't That a Kick in the Head?," written by Sammy Cahn and James Van Heusen, and performed by Dean Martin, is used in Fallout: New Vegas as one of the songs on Radio New Vegas. 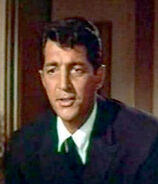 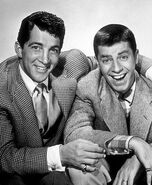 Dean Martin and Jerry Lewis
Add a photo to this gallery
Retrieved from "https://fallout.fandom.com/wiki/Dean_Martin?oldid=2916931"
Community content is available under CC-BY-SA unless otherwise noted.