Find Collar 14: Dean Domino
Strike Up the Band
Curtain Call at the Tampico
Heist of the Centuries

Bald
“Used to open in Paris. Paris. Now this.”

Dean Domino, also known as the King of Swing,[1] is a famous pre-War lounge singer, now ghoulified and trapped in the Sierra Madre Villa in 2281.

Domino and his orchestra gave performances across the United States and Europe (including Paris,[2] and had a particularly bad experience in Madrid),[3] including the casinos on the Las Vegas Strip.

He was eventually invited to perform at the Sierra Madre, but there he quickly found himself in the shadow of the casino's founder, Frederick Sinclair. While Domino was quite irritated by this, it was the fact that Sinclair, despite suffering several quite severe financial losses throughout the 2070s, still maintained an unwavering optimistic and easy-going attitude that especially triggered his ire. Soon, Domino found himself consumed with jealousy and he became single-mindedly determined to put Sinclair "in his place" by taking everything from him that he held dear.[4] He enlisted the help of his former lover Vera Keyes, a starlet who had caught Sinclair's eye. Domino introduced them to each other as part of his plan to break into the casino vault, where he would take whatever it was that Sinclair had there that was so important. However, Keyes got cold feet, so in order to ensure her continued cooperation, Domino began to blackmail her with evidence of a Med-X addiction, unaware that her addiction was a result of her being terminally ill. His final gig was to be at the Tampico, but that all changed when the bombs dropped; the security holograms activated and the Gala Event turned into a massacre.

Domino survived the apocalypse, during which he began to undergo ghoulification. He stubbornly refused to let go of the Sierra Madre's treasure, having become obsessed with it, and so spent the next two hundred years evading and mapping out the casino's security system, while plotting his grand heist, oblivious to the fact that Sinclair had long since discovered Domino's plan and prepared a trap within the casino vault. However, he was captured by Dog, fitted with an explosive collar, and forced to work for Father Elijah in breaking into the casino (and already managed to trigger the Gala event at least once for him).[5] Although his ability to obtain the treasure may have diminished with this development, his lust for it most certainly has not. Nor did his desire for freedom: Dean has killed several victims Elijah tried to use to crack the Sierra Madre, in order to examine the workings of their collars and figure out a way to remove his own.[6]

Needing a replacement for Keyes' part of his plan, Domino finally found an opportunity when Christine Royce was captured by Dog and brought to the Sierra Madre. While she was still out cold, he dragged her to the Villa's clinic and placed her in an Auto-Doc, which he programmed to perform surgery on her vocal cords, altering her voice to sound like Keyes', so she could at some point be used to unlock the vault. It was something of a leap in the dark on his part, as he actually held some doubt towards Royce making the intended recovery from the procedure.

Domino is a quick thinker, and is quite skilled with guns, specifically pistols, having spent some of his free time back in the pre-War days at the shooting range, and uses a knife for a sidearm.[7] He is very paranoid, setting up many booby traps and hiding several 'secret stashes' throughout the Villa.

Dean has a rather fragile ego, and is very vengeful towards anyone who bruises it, making sure they meet dire consequences down the line. Expressing irritation, aggression, or contempt will earn his ire, as well as challenging his sense of self importance, as he will double cross able partners simply because he perceives their competence a personal insult.[8] His voice has been unaltered by ghoulification; it remains clear as opposed to gravelly like other ghouls. 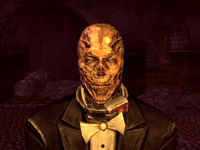 Dean without his glasses

Dean in an intro slide 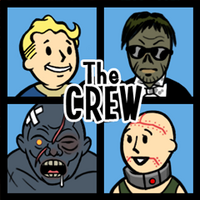 Dean in the achievement image for Assemble Your Crew