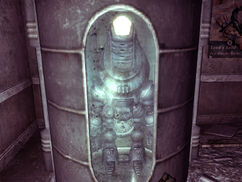 “Special needs students must be chaperoned at all times. Allow me to escort you back to class, child.”

Dean Dewey is a Protectron robot in the year 2277. He is found in a stasis chamber on ground level, next to Roosevelt Academy's administration office.

Dean Dewey is now the head disciplinarian, programmed to fill the role of Principal at the Roosevelt Academy. It can be seen patrolling the halls, making sure students are not out of class without a pass. Much like other robots encountered in Fallout 3, Dean Dewey is apparently unaware that the Great War has occurred and will go about its schedule as if nothing has happened when activated.

Dean Dewey appears only in Fallout 3.

Dean Dewey was named after Thomas E. Dewey. Dewey was the Republican candidate for president against Franklin D. Roosevelt during the 1944 presidential election.

Dean Dewey released from the pod
Add a photo to this gallery
Retrieved from "https://fallout.fandom.com/wiki/Dean_Dewey?oldid=3450120"
Community content is available under CC-BY-SA unless otherwise noted.