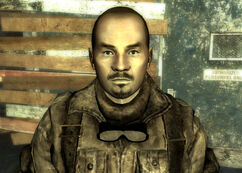 This Machine
NCR fame or caps

“Are you implying I have some kind of secret under-the-table stash I only offer to certain clients? Because that could get a man in trouble.”— Daniel Contreras

Dealing with Contreras[1] is an unmarked quest in Fallout: New Vegas.

Downloading the weapons manifest and returning it to Lt. Boyd will complete the quest. She will reward the player character with This Machine and grant NCR fame. By turning in Sgt. Contreras one will drastically decrease his weapon, ammunition, and apparel stores and he may be found in the far right un-openable holding cell. However, he can still be interacted with by aiming at him in V.A.T.S. first without attacking. Since he is one of the best weapon merchants in the game, and since the quest reward (the unique battle rifle, This Machine) is awarded in two of the three possible conclusions (siding with Keller will not grant This Machine), one should think carefully before deciding. Note that if Isaac at the Gun Runners dies, intentionally or accidentally, one will have no choice but to side with Lt. Boyd.

The player character can also complete this quest if they have sided with Contreras or even Keller. If Contreras's manifest has been downloaded it can be brought to Lt. Boyd at any time to complete the quest and receive This Machine. If one ran his errands and noticed that his "medical supplies" could be used to make chems (Medicine 25 with Blake), then they can be turned over to Lt. Boyd rather than brought back to Contreras to complete the quest as well. Sgt. Contreras will wind up in a prison cell as a result, and he will still act as a merchant though he will not restock like other merchants.

Note: One may find that there is no dialogue option to initiate this quest when speaking with Contreras, and that the only two dialogue options are to either buy his merchandise or say goodbye. Though the reason for this is unconfirmed, it is believed that completing previous quests with Lieutenant Carrie Boyd or Colonel Hsu may bar one from completing this quest through Sgt. Contreras (In some cases this can be easily solved by selecting the dialogue option to view his merchandise, exiting his inventory, then selecting the new dialogue option). The quest can still be completed by downloading the weapons manifest, as detailed in Siding with Lt. Boyd. In actuality, Contreras will not give the quest unless the player character meets a minimum level requirement of 12; otherwise he will simply state that they are too inexperienced to handle his jobs.

Speak to Sgt. Contreras about his supply which will lead to a Speech/Barter check of 80. One also has the option to pay 50 caps. Contreras will then ask the player character to speak to Isaac outside of Gun Runners.

Isaac should be located near or at the reloading bench to the right of the Vendortron at the Gun Runners storefront (If not there, he may be in his house directly to the east of Gun Runners, behind the Hostetler home. If he is not there either, check the Bugs section for this quest). Speak to Isaac and one will either have to pass a Speech/Barter check of 80 or give him 100 pieces of junk metal (tin cans, hot plates, metal pots, pots, pans and scrap metal). If one chooses to scavenge the metal pieces, the Aerotech Office Park (suite 200) has over 100 tin cans (bent and regular). Boulder Beach Campground and Broc flower cave each have around 50 tin cans (bent and regular combined); the latter area's tin cans can be found in a corner of the makeshift lab where the Ratslayer is found. REPCONN test site has around 30 tin cans and 40 scrap metal. Once enough have been gathered, return to Isaac.

Contreras' next errand will be to obtain medical supplies from Blake in the Crimson Caravan Company. Blake can be found around the center of the camp, next to the shelves with items on them, during daylight hours. With 25 Science or Medical skill one can observe for Contreras that the supplies he is acquiring could be used to make chems, or one can point the same thing out to Blake; however, doing so to either man will have no effect on the quest whatsoever. Once the supplies have been acquired, return to Contreras. At this point one can tell him about the chems and threaten (no Karma loss) to tell the NCR, resulting in him giving the player character 100 caps to keep silent, after giving him the medical supplies he will say that he needs a "couple days" before he has another mission. Waiting for 26 hours is sufficient to trigger the next quest.

Contreras will then ask one to deliver the medical supplies to a man named Price in Miguel's Pawn Shop. He will also provide a pass phrase: "I'm looking for some betting advice" to speak to Price, and he will tell the player character what pass phrase Price should say to them in return. Upon entering the pawn shop though, Price is nowhere to be found; instead, speak the pass phrase to Keller. Keller will not know the correct response. From here, there are a few options:

If the player character returns to Contreras before killing Keller, they can get 150 extra caps upfront with a Barter check of 50. This option only presents itself if:

If the player character choose not to make a deal with Keller, they will be forced to kill him to finish the quest in Contreras' favor. Killing him will result in NCR infamy. To avoid this:

Return to Contreras after killing or making a deal with Keller.

Settling things in Contreras' favor, he' will hand over This Machine and the next time his inventory restocks he will have a wider selection of items.

If the player character sides with Keller, they will not be able to obtain This Machine from Contreras, but will still be able to side with Boyd afterward, turn Contreras in and obtain This Machine from her. To complete the quest in Keller's favor the player character must have already completed Contreras' first two missions, then when he sends them to speak to Price in Miguel's Pawn Shop Keller will be there instead. The most direct way to complete the quest in Keller's favor is to give him the medical supplies.

With a Speech check of 80, Keller can be convinced to have Contreras become his informant. Or, with Barter, he can be bribed with 250 caps to throw his lot in with Contreras - despite the bribe, the plan remains him becoming an informant. Lacking a Barter skill of 60, the bribe attempt will fail, but one can then offer Keller 500 instead. Keller will accept and ask one to bring the deal to Contreras. Return to Contreras and inform him that Price is being held by the NCR and a Ranger has taken his place. If the player character was forced to give Keller the medical supplies, Contreras will demand that they kill Keller (refer to the bug where, even when killing Keller, the dialogue option with Contreras is as though a deal has been cut with the ranger - the relevance of this is regarding Contreras' special stock not seeming to become available).

One could return and kill Keller, in which case consult the "Siding with Contreras" section above. If one is determined to side with Keller, then with a Speech of 80 or a Barter of 70 Contreras can be convinced to cut a deal with Keller. Contreras will ask one to speak to Keller once again; a Speech or Barter check of 80 is required to get Keller on board; otherwise, the only dialogue option left is to attack him. Convincing Keller will complete the quest, awarding one 80 XP but not This Machine; Contreras will still deal with the player character, but it appears that they do not gain access to his special stock.

Retrieved from "https://fallout.fandom.com/wiki/Dealing_with_Contreras?oldid=3480255"
Community content is available under CC-BY-SA unless otherwise noted.