Deal with the deathclaw 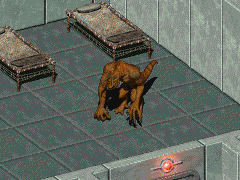 “The deathclaws have apparently been playing dumb, biding their time, and trying to learn as much as they can from us. They can even mimic human speech! I've actually had a conversation with that fellow in the next room.”— Schreber

Deal with the deathclaw is a quest in Fallout 2.

In Navarro, there is Xarn, an intelligent deathclaw that Dr. Schreber is planning to have executed. The Chosen One can offer to take care of the deed for the doctor, and there are three ways to complete the quest.

The doctor might not fight after initiating combat, so the pass key can be taken without killing him. Alternatively, the door can be opened with any blue pass key found in the game.

The third option is only available if the plan is to openly attack the Navarro troops. If the alarm has been raised when entering Xarn's room, he will ask them if they caused the commotion, and will offer to help them "kick some Enclave ass." This recruits Xarn as a temporary companion. When the Chosen One leaves Navarro, Xarn is considered free.

Retrieved from "https://fallout.fandom.com/wiki/Deal_with_the_deathclaw?oldid=3177944"
Community content is available under CC-BY-SA unless otherwise noted.