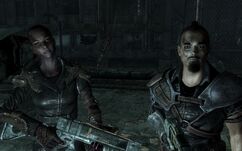 Dead mercenaries can be found across the Capital Wasteland in 2277.

Mercenaries are guns for hire in the Capital Wasteland. Their bodies are scattered throughout the wasteland in places such as Old Olney, Rock Creek Caverns, and the deathclaw sanctuary. They are not affiliated with Reilly's Rangers, Talon Company, or any other known mercenary group. Each merc found dead is typically equipped with leather armor in poor shape. Unlike many other NPCs, they can also be carrying a bobby pin.

These mercenaries appear only in Fallout 3,

A character titled "Dead mercenary," seen in an early gameplay video, was cut from Fallout 3 near the end of development. She was intended to spawn dead outside of the Super-Duper Mart. This character was equipped with combat armor, biker goggles, a bandana, a Type 93 Chinese Assault rifle, and 214 5.56mm rounds.[1]

A dead mercenary seen inside Anchorage Memorial. He carries the note "Merc's orders".

A dead merc lies among a pile of corpses and gore in the deathclaw sanctuary.

Dead mercenary cut from the game.
Add an image to this gallery

Retrieved from "https://fallout.fandom.com/wiki/Dead_mercenary_(Fallout_3)?oldid=3125074"
Community content is available under CC-BY-SA unless otherwise noted.