The Dead Wind Cavern is a location in the Mojave Wasteland in 2281. It is located near Primm Pass and south of REPCONN test site, past Harper's shack. It is home to a wide variety of deathclaws, including the legendary deathclaw.

The entrance of the cave rests at the end of a long, shallow valley running northeast to southwest, ascending towards the cave. Against one of the cliffs is a hollowed-out rock. A small pack of deathclaws and young deathclaws congregate near the entrance.

Once inside, anywhere from one to five deathclaws inhabit the entrance area as well. This initial cavern funnels into a single passage which quickly forks left and right. The right fork leads to a long, rectangular room and contains two or three deathclaws before becoming a dead end.

The left fork opens into a long, rectangular area with another two or three deathclaws. A passageway to the left leads to a hatchery area, containing a deathclaw mother and a few deathclaw babies or a young deathclaw and the pile of deathclaw eggs needed for the Bleed Me Dry quest. Just past this passageway, turning right will lead to the impassable rubble encountered at the previous right fork. Here the player character will find a skeleton and a duffle bag lying up against the rubble, accessible only from this side.

The final room of the cavern lies to the left, just before the duffle bag. It contains two normal deathclaws and the legendary deathclaw. This is also the location of a dead Brotherhood of Steel paladin wearing Brotherhood T-45d power armor and a T-45d power helmet, with a few dozen 40mm grenades on their body (both normal and incendiary varieties). Mercy, a unique 40mm grenade machinegun will be lying beside the body. 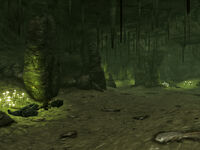