Camp Leader
2 of Clubs (with Alexus)

We Are Legion
Restoring Hope 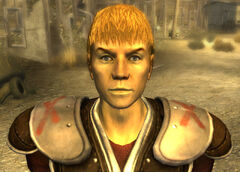 “The 'great' republic couldn't find enough soldiers to liberate this camp, so they sent you? Pathetic.”

Dead Sea is a decanus of Caesar's Legion leading Camp Nelson in 2281.

Dead Sea has not known life outside the Legion. Taken as a child from the tribes on the shores of the Great Salt Lake by Caesar's agents, he was raised and inculcated with Caesar's doctrine, creating an obedient and loyal soldier. His boundless devotion to his master led to a martial career, thus far culminating in the rank of decanus, earned in 2276.[1] His notable victories include the defeat of the Sun Dogs tribe. His martial prowess in that campaign earned him a rare distinction, a unique machete, the Liberator, gifted to him by his centurion.[2]

Although zealously devoted to Caesar, Dead Sea craves glory in battle. He would gladly part with the Liberator if it meant the opportunity for earning another such accolade.[3] As such, while he does not second-guess or dispute Caesar's orders, he is frustrated with being stationed at Nelson on what is basically a routine terror operation. Only the bloodshed and the effect they have on the enemy calms the thirst for blood, guts, and glory in him.[4][5][6][7]

However, he is also quick to snap at people who presume to have any authority over him. It provides a useful outlet for his frustration, even if the slight is accidental.[8]