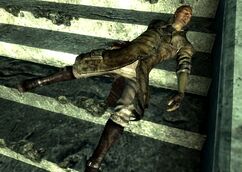 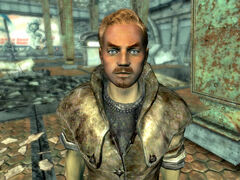 A dead Regulator can be found lying on the front steps leading out of the Arlington/Wasteland Metro into the Arlington Cemetery North.

He will only appear if the Lone Wanderer has taken the Lawbringer perk and has good Karma. He met his fate when he was searching for Junders Plunkett, as evident from the note on his body.

When resurrected through the console, the Regulator will attack regardless of one's Karma.

The dead Regulator appears only in Fallout 3.

Add an image to this gallery
Retrieved from "https://fallout.fandom.com/wiki/Dead_Regulator?oldid=3234616"
Community content is available under CC-BY-SA unless otherwise noted.