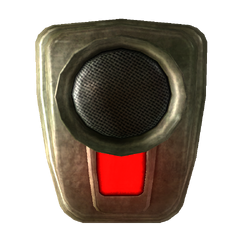 The Dead Money speaker is a world object in the Fallout: New Vegas add-on Dead Money.

In Dead Money, speakers (like radios) take on a new and threatening role: by interfering with the signal to the Dead Money collar, they can cause the collar to detonate, killing the Courier.

The Courier has approximately 10 seconds from when the collar starts beeping to find and disable the speaker or back away out of range. Speakers have a range of 12 yards, whereas radios reach only 8 yards.

Originally before the war, while the casino was under construction, the surrounding area of the town had numerous speakers installed in which to broadcast music. Some of the tourists took to vandalizing them which led to Frederick Sinclair having the speakers shielded to prevent further vandalism attempts. By 2281, the speakers continue to play music because of an excited security guard who turned them all on in anticipation of the Gala Event;[1] according to Father Elijah, over the 200 years of being on and broadcasting, the signal to the speakers and radios has decayed so drastically that the frequency changed to garbled static.[2]

Retrieved from "https://fallout.fandom.com/wiki/Dead_Money_speaker?oldid=3241043"
Community content is available under CC-BY-SA unless otherwise noted.