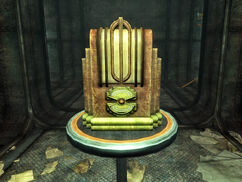 The Dead Money radio is a world object in the Fallout: New Vegas add-on Dead Money.

In Dead Money, radios and speakers take on a new and threatening role: by interfering with the signal to the Dead Money collar, they can cause the collar to detonate, killing the Courier.

One has approximately 10 seconds from when the collar starts beeping to find and disable the radio or back away out of range.

Radios have a signal range of 8 yards.

Retrieved from "https://fallout.fandom.com/wiki/Dead_Money_radio?oldid=3253271"
Community content is available under CC-BY-SA unless otherwise noted.