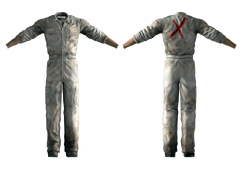 The Dead Money jumpsuit is a piece of clothing in the Fallout: New Vegas add-on Dead Money.

It provides no Damage Threshold, but grants a bonus of 5 to the Repair skill. It is a light gray jumpsuit with a red "X" on the back making it similar to the Legion slave outfit. The Courier is wearing this when he/she wakes up after being brought to the Sierra Madre by Dog. This clothing is similar to the civilian engineer jumpsuit, the only difference being that the civilian engineer jumpsuit has no red "X" on the back. It is exactly the same as the Yangtze camp jumpsuit from the Big MT, explaining where Elijah got them from and giving a full explanation on both the jumpsuit and the bomb collar's origin.

Retrieved from "https://fallout.fandom.com/wiki/Dead_Money_jumpsuit?oldid=3139050"
Community content is available under CC-BY-SA unless otherwise noted.