Patch 1.2.0.31x
“You've heard of the Sierra Madre Casino. We all have, the legend, the curses. Some foolishness about it lying in the middle of a City of Dead, a city of ghosts buried beneath a blood-red cloud... a bright, shining monument luring treasure hunters to their doom.”— Father Elijah, Dead Money ending

Dead Money is the first add-on for Fallout: New Vegas, developed by Obsidian Entertainment and published by Bethesda Softworks.

“You've heard of the Sierra Madre Casino. We all have, the legend, the curses. Foolishness about it lying in the middle of the City of the Dead, buried beneath a blood-red cloud. A bright, shining monument luring treasure hunters to their doom.


The world's most famous stars and entertainers were invited to its Grand Opening. An invitation was a sign of... exclusiveness.

The opening was supposed to symbolize a road to a brighter future, not just for the world... ... but for all who came to its doors. A chance for anyone to begin again. Except - the Sierra Madre never opened.

The war froze it in time, like a big flashbulb going off. The Grand Opening - one big ending of humanity. It's still out there, in the Wastes, preserved, just waiting for someone to crack it open. But getting to it. That's not the hard part. It's letting go.
”— Father Elijah, Dead Money intro

Dead Money is set in the Sierra Madre, an opulent and extravagant resort that would have been the greatest casino in the west, had it ever been opened. The bombs fell before the grand opening gala event, and the Sierra Madre froze in time, its state of the art security system locking the place up tight. Nothing could get in, and none of the guests could escape. The security holograms then activated and the once glorious event turned into a slaughter. After many years, the climate control and air conditioning systems within the facility began to spit strange toxins into the surrounding city, causing a red cloud to form over the area - which proved lethal to anyone who tried to explore the city. Only a mysterious group called the ghost people survived to call the city home, trapped inside what appears to be hazmat suits, they wander the streets never speaking to their victims, only capturing them alive and dragging them away to the depths of the city deep within the Cloud. The Sierra Madre attempted to send out a distress signal on the day of the War, but the system did not broadcast an alert signal, having been hooked up to the gala event to broadcast adverts for the casino, so help never came.[1]

And so the Sierra Madre faded from memory, only occasionally being seen in posters across the wastes, until it took on mythic ghost story status, a supposed "City of Gold" in the wasteland where all the treasures of the Old World were rumored to be held. It was kept alive as a late-night saloon story by prospectors who'd claimed to have found maps leading there and were willing to part with the map for a few caps... or a drink... or a warm place to sleep.[verification needed]

The Sierra Madre is a place in the wastes, with travelers risking their lives to find it. Only one man truly "found" it and lived. After the fall of HELIOS One, Father Elijah, formerly an elder of the Mojave Brotherhood of Steel, set out to find new weapons to eradicate the NCR, and in the process, he discovered the Sierra Madre. In doing so, he lured others, including the Courier, to the resort, forcing them to navigate the hazards of the Madre and play the pawns in his game to crack open the casino's vault, long since lost to time. If the Courier wished to escape this hellish place, they would have to be clever, and use their new allies as Father Elijah did. The real question is, what really mattered to them? The treasure? Revenge? Survival? Or their humanity?

The Courier firing at a ghost person 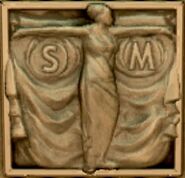 Sierra Madre's casino before the cloud 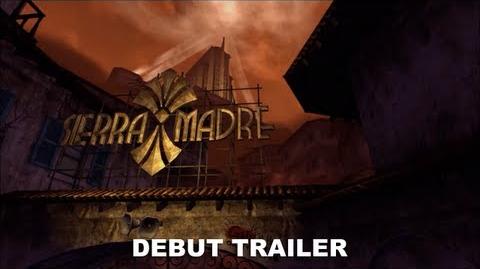