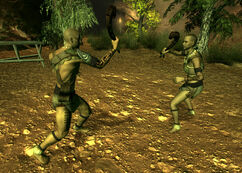 “Joshua in high place of cave. You show respect, utman! Joshua is greatest warrior. You show him no respect, he show you thunder and fire!”

They speak using a combination of the Dead Horses language and English.

Retrieved from "https://fallout.fandom.com/wiki/Dead_Horse_warrior?oldid=3417116"
Community content is available under CC-BY-SA unless otherwise noted.