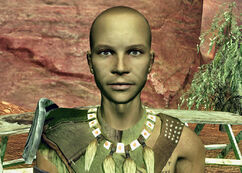 Dead Horse Disciples of Canaan are scouts of the Dead Horses tribe, living in Zion Canyon. They can be found mostly near ranger stations and edges of cliffs watching for White Legs.

They speak using a combination of the Dead Horses language and English (the latter potentially taught to them by the New Canaanites).

Dead Horse disciples can be seen carrying war clubs, but on death there is no war club despite their corpse holding on to one.

Retrieved from "https://fallout.fandom.com/wiki/Dead_Horse_Disciple_of_Canaan?oldid=3394565"
Community content is available under CC-BY-SA unless otherwise noted.