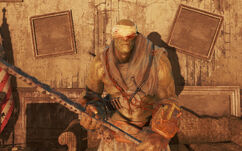 Dead Eye is a super mutant encountered at Fraternal Post 115 in 2287.

Dead Eye is a blind super mutant residing in Fraternal Post 115. He stands on the stage listening to Diamond City Radio. If aggravated, such as the player character moving too close or setting off the fragmentation mines nearby, Dead Eye will set off an alarm which will cause several super mutants to spawn and attack. If killed before triggering the alarm, one can use the nearby circuit breaker to spawn them.

Dead Eye appears only in Fallout 4.

Retrieved from "https://fallout.fandom.com/wiki/Dead_Eye?oldid=3255300"
Community content is available under CC-BY-SA unless otherwise noted.