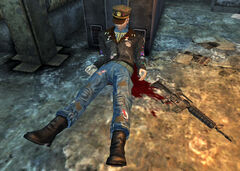 Dead boomer, in corridor to the left

The dead Boomers are deceased Boomers found inside the Nellis array.

It appears that they were killed by giant ants. The Courier can find two of them during the quest Ant Misbehavin'. Both of them are found near each other, on the top floor of the Nellis array.

Retrieved from "https://fallout.fandom.com/wiki/Dead_Boomer?oldid=3173505"
Community content is available under CC-BY-SA unless otherwise noted.