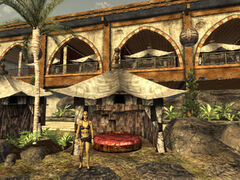 Dazzle is a prostitute living in Gomorrah's courtyard in 2281.

Dazzle was born around Vegas, but grew up in New Vegas's Westside. Her father left Dazzle's mother when she was young, and Dazzle grew up with her mother until the former was sold to the Omertas. At some point, she was bought by the Omertas and became a prostitute at Gomorrah on the New Vegas Strip. While she admits that it can be bad at the Gomorrah some days, she will take the Gomorrah over "that dump" in Westside.[1]

As a prostitute at Gomorrah, she later met Corporal White who visited her for her services whenever he could, subsequently divulging information about the NCR crops and water rationing.[2][3]