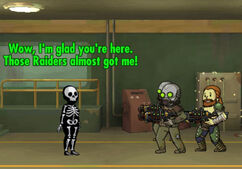 “Herb Vest told me that people who go to Vault 31 end up missing. I'm going to head to Vault-Tec's offices to learn more about the Vault's past.”

Days Gone Bye is an overseer quest and part of The Mystery of Vault 31 multistage questline in Fallout Shelter.

Throughout the vault there are raiders in groups of two to five that must be fought. There may also be a raider leader amongst them. The person that must be sought out will be on the 4th floor, in the rightmost room. She will give a reward of a legendary junk item and some caps.

"Days Gone Bye" is the pilot episode of the post-apocalyptic zombie TV series The Walking Dead, named after the first story arc in the original comic series that the show is based off of.

Rewards
Add a photo to this gallery
Retrieved from "https://fallout.fandom.com/wiki/Days_Gone_Bye?oldid=3265681"
Community content is available under CC-BY-SA unless otherwise noted.