Day Tripper is a consumable item in Fallout 76.

A mild pre-War hallucinogenic drug, Day Tripper (stylized as Daytripper) was favored by Americans looking for a happy escape from reality. The resulting high made users more laid back and relaxing, though the tranquilizing effect made physical tasks more difficult to accomplish.[1] It was quite popular among all social groups in pre-War America, helping society cope with the strain of the Sino-American War, food riots, and general dissolution of society across the nation.[Non-canon 1]

Day Tripper comes in a green bottle, with flowers and the word "Daytripper" printed on the label. Day Tripper increases the user's Charisma and Luck by three points while decreasing Strength by two points for 10 minutes. It also increases dehydration by 3%, and has a 15% chance of causing an addiction. 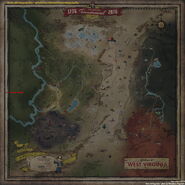