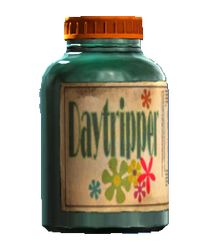 “A pre-war chem favored by those looking for a "happy escape," Daytripper raises both Charisma and Luck, but lowers Strength, for a limited period of time.”— Loading screen hint

Day Tripper is a consumable item in Fallout 4.

A mild pre-War hallucinogenic drug, Day Tripper (stylized as Daytripper) was favored by Americans looking for a happy escape from reality. The resulting high made users more laid back and relaxing, though the tranquilizing effect made physical tasks more difficult to accomplish.[1] It was quite popular among all social groups in pre-War America, helping society cope with the strain of the Sino-American War, food riots, and general dissolution of society across the nation.[Non-game 1]

Retrieved from "https://fallout.fandom.com/wiki/Day_Tripper_(Fallout_4)?oldid=3508158"
Community content is available under CC-BY-SA unless otherwise noted.