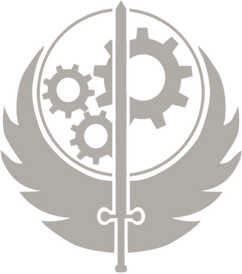 Knight Sergeant Dawes (registration DW-112KS) was a former member of the Brotherhood of Steel who died in 2287.

Knight-Sergeant Dawes was one of seven Brotherhood soldiers selected to be part of Recon Squad Gladius to investigate the Commonwealth. Following the squad setting up a base in the Cambridge Police Station and a failed attack on the Corvega assembly plant, Dawes assisted in reconnaissance of Boston Airport and Fort Strong. While at Fort Strong, they were surprised by the super mutants living there and Dawes was killed from a blow to the head by a sledgehammer-like weapon, completely destroying his head.

Dawes is mentioned only in Fallout 4.

Retrieved from "https://fallout.fandom.com/wiki/Dawes_(Fallout_4)?oldid=3230813"
Community content is available under CC-BY-SA unless otherwise noted.