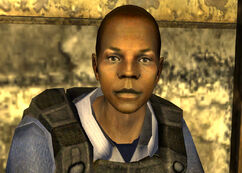 “That's us. We got sent here to fix the rails and make some new ones, and for that we got to use dynamite. Of course, dynamite works pretty good against caravan guards, too. So, that's what we do - rob and blow things up.”

Dawes is a Powder Ganger who guards the NCR Correctional Facility entrance in 2281.

Dawes claims he was originally the leader of a gang in the Hub back in New California. However, he was apprehended and sentenced to imprisonment in the correctional facility in the Mojave Wasteland for starting a riot. Dawes will grant access to the NCR Correctional Facility to a character who has a sufficient reputation with the Powder Gangers in exchange for 100 caps. Alternatively, assisting Joe Cobb in Run Goodsprings Run will earn free access to the facility.

Retrieved from "https://fallout.fandom.com/wiki/Dawes_(Fallout:_New_Vegas)?oldid=3354628"
Community content is available under CC-BY-SA unless otherwise noted.