Captain in the Unity (formerly)
Leader of Davison's nightkin

Davison is the leader of Davison's nightkin who are looking for Stealth Boys in the Mojave Wasteland in 2281.

Davison was once a captain in the Unity's service, leading the Master's elite, the nightkin, into combat. He recalls that he once held the rank of captain and that his last name is Davison, but he does not remember his first name.

Ever since the fall of the Master in 2162, his mental state has been steadily deteriorating, both as a result of his wandering through the desert and use of Stealth Boys. The factors coalesced into particularly severe mental disorders characterized by delusions and schizophrenia. Following a brief stay with Marcus at Jacobstown, who tried to take care of the nightkin as best they could, Davison took his nightkin out into the wastelands again, following the guidance of "Antler."[1] Antler is the new master of Davison and his nightkin, one they carry with themselves everywhere they go, as it is a bleached brahmin skull.[2]

The nightkin later seized the REPCONN test site, descending on the Bright Brotherhood occupying it and taking them by surprise, using the few Stealth Boys they still had available.[3] This was because Davison found a shipment invoice detailing a shipment of 144 Stealth Boys to the site. As nightkin struggle to cope with being exposed whenever they are not cloaked by one of these devices, this was a boon to the nightkin.[4][5] With further threats,[6] and although they killed nearly half of Bright's followers and turned the test site upside down, the mutants have failed to uncover any trace of the Stealth Boy stash. The only place they have not checked is the storage room where Harland holed himself up after the nightkin chased him into a corner. However, Davison is unwilling to waste the lives of his followers on rushing Harland through the traps and the ghoul's rifle, so he and his followers are stuck in a holding pattern until someone breaks the stalemate.[7]

Like many nightkin that had the misfortune of losing most of their intelligence, Davison is aggressive, impatient, and suspicious of others.[8] Paired with his paranoid schizophrenia from prolonged Stealth Boy use, this makes Davison a difficult man to reason with as he is nothing but distrustful. Along with the schizophrenia, Davison has also developed dissociative identity disorder and projects onto a brahmin skull the personality of "Antler," a prophetic or god-like being that Davison devotes himself to, in order to cope with the loss of the Master. Ironically, Antler seems to represent a more rational and benevolent side of Davison, as "he" is the one who is willing to negotiate a peaceful solution with the Courier, where Davison is distrustful and paranoid. Despite his delusions - such as attributing all of his higher cognitive functions to "orders from Antler" - Davison insists that he is well, stating he is "in command of my faculties, in command of my troops!"[9][10][11]

He and all nightkin within the basement can be killed with no repercussions only after telling him the Stealth Boy shipment is no longer in the facility. 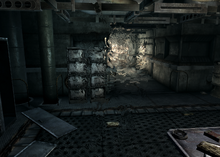