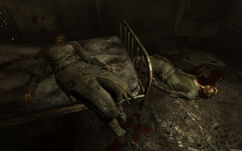 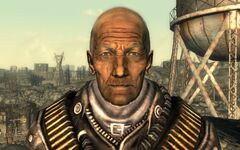 Davis as he appears in the Prima Guide

“The family must have gotten to them in the last attack! Sons of bitches!”— Evan King, upon hearing of the West's deaths

Davis West was an inhabitant of Arefu in 2277.

The head of the West family has recently met an untimely death. His demise is suspicious, and the wounds are not consistent with the usual methods of murder in this godforsaken place. Davis has two known kin, a daughter named Lucy who lives in Megaton, and a son named Ian, who was supposed to be living in Arefu with the family. There's no trace of him.[1]

He and his wife are both treated as props, rather than bodies, and are immune to being dismembered, even by a high power weapon such as the minigun.

Davis West appears only in Fallout 3.

Retrieved from "https://fallout.fandom.com/wiki/Davis_West?oldid=3245854"
Community content is available under CC-BY-SA unless otherwise noted.