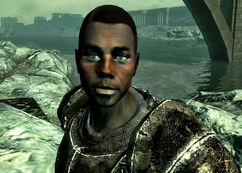 “They came out of nowhere. I need to get back to report to Lepelletier. She'll want to know what happened.”

Officer Davis is a member of the Rivet City Security Force in 2277. According to Officer Lepelletier, he is rather inexperienced.

Rivet City has contracted with the Brotherhood of Steel to help escort water caravans to their destination, in exchange for getting money and technology from the Brotherhood. Officer Davis is one of the security team hoping to be paid with technology.[1]

Officer Davis appears only in the Fallout 3 add-on Broken Steel.

Retrieved from "https://fallout.fandom.com/wiki/Davis_(Fallout_3)?oldid=3444904"
Community content is available under CC-BY-SA unless otherwise noted.