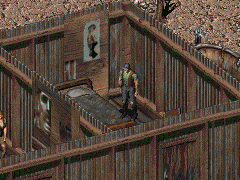 “Well, I uh... I mean, I... I supervise and take care of stuff. I'm the owner's son after all. I'm going to inherit this place when my dad kicks off.”

Davin is the son of Grisham, the slaughterhouse operator in Modoc. Davin's sister is Miria, who can be married instead, with similar implications for the party's average combat readiness.

Unlike Miria, he has animation frames for throwing (for grenades & flares), clubs and pistols, as well as knives, and Strength of four rather than three, which as Per Jorner explains, "means he sucks with a wider and different assortment of weapons."[1]

Male or female characters with a Charisma stat of 7 or 8 and a good town reputation can add him into the party by marrying him. This is permanent, with only one option for removing him that doesn't involve killing him or selling him to slavers. He cannot be asked to wait as a normal party member can. Adding him is achieved by seducing, getting into his pants, then having sex with him, (the usual fade to black, except that in this case, the player character's entire inventory ends up on the ground) and then marrying him (in a shotgun ceremony). This sequence can become bugged, so the more the player character does during the brief interval between the deed and being "caught" by Grisham, and the more the player character does during the ceremony, the more likely it is that it can become bugged.

Once married, Davin will not leave the party unless killed or divorced. Like Miria, he has no additional points in any skills whatsoever, but since the default for Unarmed has the highest base value, he is most proficient at that skill. Like Miria, and unlike regular joinable NPCs, neither his skills, HP, nor AP improve. Though, as he is human-sized, he can still wear armor.

Davin appears only in Fallout 2 and is mentioned in the Fallout Bible.

After hitting him in his room, he'll be treated as a companion. However, it lasts until the end of the turn. [verified]

Retrieved from "https://fallout.fandom.com/wiki/Davin?oldid=3341370"
Community content is available under CC-BY-SA unless otherwise noted.