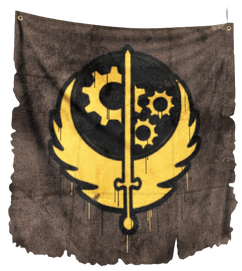 Elder David James was the fourth elder of an unknown chapter of the Brotherhood of Steel.

David James was a Brotherhood of Steel elder who was charged with destroying an unidentified technological device. During and after his dismissal as elder, he refused to provide any details about what the device was or why he destroyed it. A report of the incident was written by Head Scribe Talwin.[1]

Elder David James is mentioned only in Fallout: New Vegas.

Retrieved from "https://fallout.fandom.com/wiki/David_James?oldid=3291047"
Community content is available under CC-BY-SA unless otherwise noted.