David's trophy is a miscellaneous quest item in Fallout 76.

The item is a vandalized "World's Best Boss" trophy for David Thorpe, made by his lover Rosalynn Jeffries to commemorate his rise to power, and was seen as a symbol of his power. It has a human skull centerpiece, adorned with an eyepatch, barbed wire, and metal spikes. The surrounding pieces are a bowie knife, as well as a blade resembling a Trench knife. A second bowie knife is stabbed through the back of the skull, with the split part repaired with staples or stitches. The item is part of the Strange Bedfellows quest line, to be handed over to Meg Groberg as a symbolic way of David passing the mantle of leader onto her.

The trophy can be collected in David Thorpe's quarters at Pleasant Valley cabins during the quest Strange Bedfellows. David's quarters are on the upper floor of the Black Diamond Lodge, and the trophy is on the dresser.

After the quest, the trophy can be seen in the Crater Core, next to Meg's throne.

The trench knife from Operation Anchorage appears on David's trophy. 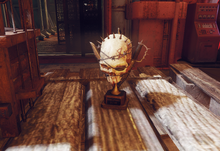 Trophy in the Core
Русский
Community content is available under CC-BY-SA unless otherwise noted.
Advertisement