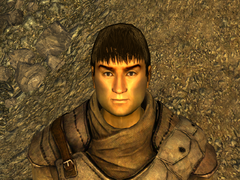 Crenshaw without his hat

“Holy Christ. Get- get away from me!”

Pvt. Davey Crenshaw is an NCR soldier living at Camp McCarran in 2281.

Davey Crenshaw is an undisciplined and self-centered trooper[1] with no respect or concern for anyone. In fact, he is completely oblivious to his own lack of self-awareness and complete disregard for everyone around him.[2][3][4] He is particularly known for inciting pranks on his fellow serviceman,[5] although all his pranks have been harmless, it was never because he was concerned with safety.[2] This has earned him the ire of all those who serve with him.

Two of Crenshaw's shenanigans are of particular note; the first is the time he led a brahmin into the upstairs section of the terminal building. Not only because brahmin cannot go downstairs, but also because it visited him in the cell multiple times. Another time was the time he dropped firecrackers into the toilets, completely destroying them. The inability to repair and/or replace them led his fellow servicemen to want to shoot him. Crenshaw himself believing the only reason that they didn't was due to how shorthanded they were.[5] Crenshaw has also been responsible for sabotaging computer security around Camp McCarran and he's forced personnel around the Camp to be more mindful of their terminals while leaving,[6] though that still hasn't stopped him from also hacking into others terminals to cause mischief.[7]

His conduct has earned him a reputation as a "problem child" and has had multiple disciplinary hearings,[8][9] despite this he is completely unrepentant,[10] in fact it is a point of pride. Because of his actions, and his superiors complete lack of belief in him, he was given the assignment to guard one of the more remote posts at Camp McCarran.[11]

This situation was manipulated by frūmentārius Picus. Using Crenshaw's reputation against the NCR he came up with the plan to use Crenshaw as a fall guy for his ongoing sabotage and infiltration. Convincing the entire base wouldn't be a hard sell,[9] Picus' plan involved first to have an accomplice plant evidence for Picus' bombing of the monorail in his footlocker,[12] then having the accomplice kill Crenshaw at his post. (Something made easier by Picus reassigning the other guard on duty, isolating him.) Then having the accomplice posthumously turn Crenshaw in for the "treason."[13][14][4]

I Put a Spell on You: If the Courier chooses the Legion's side, Crenshaw is to be killed in order to frame him for destroying the NCR monorail. Because he is well known as a prankster, when the player character talks to Colonel Hsu, he will believe that Crenshaw planted the bomb on the monorail.

If the Courier decides to talk to him before killing him, the option comes up for them to pull the pin off his grenade by passing a 40 Sneak check.

One can pull the pin of Crenshaw's grenade, even though he has no grenade in his inventory.

Retrieved from "https://fallout.fandom.com/wiki/Davey_Crenshaw?oldid=3334698"
Community content is available under CC-BY-SA unless otherwise noted.