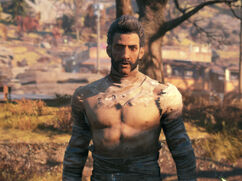 Davey, known in-game as a Free Radical, is a member of the Free Radicals and a treasure hunter in Appalachia in 2103.

With another Free Radical, Davey is searching for the treasure of Appalachia and figured a broadcast advertising it would be the best place to look.

Hunter for Hire: With a Luck of 2 or above, the player character can guess that the Free Radical's name is Davey, and convince the other gang member that Davey is plotting to kill them. The Free Radicals will then turn on each other.

Davey's name is only mentioned in dialogue during Hunter for Hire.[1]

Davey appears only in Fallout 76, introduced in the Wastelanders update.

Retrieved from "https://fallout.fandom.com/wiki/Davey?oldid=3371651"
Community content is available under CC-BY-SA unless otherwise noted.