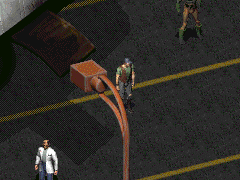 “Vikki Goldman. I saw one of her movies up in Canada, and I just knew that she'd fall in love with me. It hasn't happened yet, but I'm working on it.”

Dave Handy is one of the Hubologists in 2241.

The tanker needs fuel: After joining the Hubologists, Dave can hack the Shi mainframe and divert fuel to the Poseidon tanker.

Dave Handy appears only in Fallout 2.

He was named after Fallout and Fallout 2 designer David Hendee.

Retrieved from "https://fallout.fandom.com/wiki/Dave_Handy?oldid=3179262"
Community content is available under CC-BY-SA unless otherwise noted.