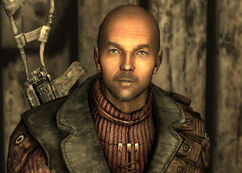 Dave is the self-proclaimed president of the Republic of Dave, a small farmstead on the far northeast edge of the Capital Wasteland in 2277.

Supreme Commander and President for Life, Dave, born in 2230, is the descendant of those who fled to the hills and managed to survive the war. His family has lived there for the last 200 years. His "citizens" are mostly descendants of his own ancestors or others with similar mindsets. Over the years, Dave's tiny plot of land has been also known as the "Kingdom of Larry," the "Republic of Stevie-Ray," "Billsylvania," the "New Republic of Stevie-Ray," and most recently, the "Kingdom of Tom" after Dave's father. Dave, now 47 years old, strongly believes that his land is a functioning nation and considers the compound his sovereign territory. He was briefly banished from this place during his father's presidency and did some work with Allistair Tenpenny. Dave hates Tenpenny and people like him and doesn't want to be reminded of the past.[1]

Dave re-wrote his Republic's marital laws shortly after seizing control in order to get himself a second wife, Jessica. The excuse given to his first wife was that he "needed to re-populate the land of Dave so they could grow and soon own all of the Capital Wasteland."

Dave's activities consist of staying in his office and never going outside of the main building in the Republic of Dave.

How the Lone Wanderer greets Dave in their first meeting plays a large role in how Dave will interact with the player character. If greeted with the Wasteland Ambassador route, it will give him a false sense that the Republic is being recognized as sovereign, and he will interact fairly well. If one requests asylum, they will receive a neutral interaction from him from there on out. If one tells Dave that his "Republic is forfeit," Dave and all the other inhabitants of the Republic will become hostile.

Dave appears only in Fallout 3.

It is possible to pickpocket Dave's special key for the quest You Gotta Shoot 'Em in the Head and then afterward acquire the key a second time with Speech. [verified]

Retrieved from "https://fallout.fandom.com/wiki/Dave_(Fallout_3)?oldid=3363313"
Community content is available under CC-BY-SA unless otherwise noted.
... more about "Dave (Fallout 3)"
RDF feed
Has platform
Playstation 3 +  and Xbox 360 +