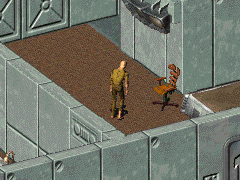 Unluckiest person in the wastes, hands down

“Well, there I was sitting in the desert, waiting for the world to swallow my miserable existence, when a pack of deathclaws shows up. Well, I'm thinking to myself, this is it. Now I can die. I can wind up as a pile of deathclaw shit in the middle of the desert. But no... fate had yet another cruel card to play against me”

Dave is a sad, older man[1]. Born two months premature around 2180, Dave's life is an endless path of misery and misfortune. He became a grumpy man, with a weathered face and the stance of a man who has had his fair share of abuse. Bad luck in his life included:

He was brought to Vault 13 by deathclaws, who found him dying of thirst in the wastes, after his brahmin died and he began to suffer from joint pains, headaches, diarrhea and a nasty rash. However, his life experiences make him expect the worst and despite being fed, sheltered and medicated, he continues to think he is about to be devoured by the deathclaws.

Dave can recount his life's story to the Chosen One, but he will stop at the fungus incident, implying there is even more disgrace, as the Chosen One interrupts him before he can continue.

Dave appears only in Fallout 2.

Retrieved from "https://fallout.fandom.com/wiki/Dave_(Fallout_2)?oldid=3073026"
Community content is available under CC-BY-SA unless otherwise noted.