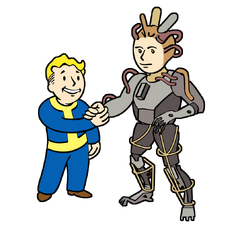 Data Recovery is a side quest in the Fallout 4 add-on Far Harbor.

The burning wreck houses two of the devices on the deck, with a third inside the blue shipping crate onboard (unmarked, remains seated in the equipment within the box and resembles the other two drives. Hovering the cursor over it reveals that it can be collected), as well as a locked chest which can be opened with Victoria's key. Recover the devices, and return to Faraday to collect a reward. It is possible to get up to 400 caps if one chooses the option to ask for more money four times, each with a progressively harder speech check.

The quest can be completed by gathering only two storage drives. Although Faraday will mention a missing third drive, he will ultimately being satisfied with what is brought to him. If the third storage drive is obtained from the damaged blue crate, Faraday complains about the missing drive even though they have all been found, leaving the third storage drive in the Misc inventory with a weight of 6. Since it is not quest tagged, it can be removed from the Sole Survivor's inventory, though it is missing a collision mesh and will hang in the air if dropping it rather than placing it in a container.

Opening the chest is not necessary to actually complete the quest but interacting with it without the key can add extra dialogue.

It is impossible to turn in the quest back to Faraday if DiMA dies. [verified]

Retrieved from "https://fallout.fandom.com/wiki/Data_Recovery?oldid=3368005"
Community content is available under CC-BY-SA unless otherwise noted.