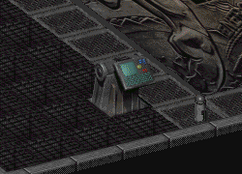 The DataPlex 2000 SmarTerminal, with a full 64k of RAM, is the very latest in computer technology.[1] These terminals are located throughout the Enclave Oil Rig and can be used to access PoseidoNet.

Appearing as a standard terminal port, the DataPlex 2000 SmarTerminal finds its primary functions being directed towards everything from movies, games, personnel filings, private messages, and most importantly, as an access port to the Enclave oil rig's primary systems such as turret controls, alarm systems, and local research and security computers.[2]

With a high Science skill, one can download a few holodisks of data from PoseidoNet using the terminal:

The developers had quite some fun with the terminal, embedding several gems into its scripting.

Retrieved from "https://fallout.fandom.com/wiki/DataPlex_2000_SmarTerminal?oldid=3164084"
Community content is available under CC-BY-SA unless otherwise noted.