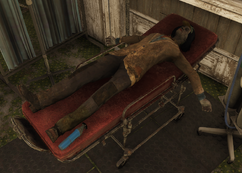 Dassa's body in the Flatwoods Church prior to Wastelanders

Leader of the Flatwoods Responders outpost

Dassa Ben-Ami is a deceased woman in Flatwoods, Appalachia, in 2102.

Dassa was an anthropology student at Vault-Tec University studying for her Ph.D. in anthropology. While printing her thesis, the Great War broke out and she rushed to Vault 76. However, her father, a Vault-Tec employee, was only able to get two reservations into the vault. Dassa refused to go, insisting that he and her younger brother go to the vault instead of her.

Returning home to Charleston, Dassa survived on her own before enlisting with the Responders. Throughout her years as a Responder, she specialized in leadership, assisting with the recovery after the Christmas Flood and created the Survivor Stories, a series of holotapes recorded by survivors of the War that wanted to preserve their stories.[1]

Dassa Ben-Ami appears only in Fallout 76.

Retrieved from "https://fallout.fandom.com/wiki/Dassa_Ben-Ami?oldid=3257962"
Community content is available under CC-BY-SA unless otherwise noted.