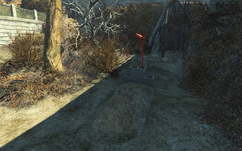 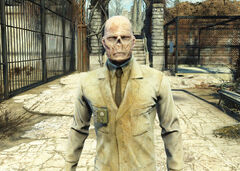 Dr. McDermot, spawned with the console

Dr. Darren McDermot was a scientist working with Dr. Hein in the cloning facility beneath the Safari Adventure Welcome Center. After learning of the destruction caused by the Great War, he worked to repopulate the world with animals, but instead created the gatorclaw.

After the bombs fell, McDermot was the sole survivor of Safari Adventure and mutated into a ghoul. Throughout the next two centuries, McDermot survived by taking advantage of the Nuka-Gen replicator to create an endless supply of food.[1] He remained in total isolation without any outside contact, in which he deliberately chose this, as he wanted to protect what is possibly the only known successful cloning machine in existence from those who would seek to misuse it, despite the loneliness taking its toll on him.[2]

One day, while foraging for food and supplies, McDermot discovered a dead super mutant and brought it back to his laboratory. Upon examining the corpse, McDermot was able to extract its genetic sample and used it to improve the replicator.[3]

When scavengers began to arrive in Nuka-World and encroach into Safari Adventure, McDermot attempted to create a guardian creature to protect himself and Safari Adventure. The end result was the gatorclaw. His hopes for the creatures became for naught when the gatorclaws proved to be extremely uncontrollable, resulting in him becoming fatally wounded by the creatures. McDermot barely escaped and was found by Cito, who tried to nurse him back to health. In his final moments, McDermot tried to explain to Cito about what he had done and urge him or anyone to stop the replicator that keeps creating the gatorclaws.[4]

Dr. McDermot is mentioned only in the Fallout 4 add-on Nuka-World.

Retrieved from "https://fallout.fandom.com/wiki/Darren_McDermot?oldid=3176419"
Community content is available under CC-BY-SA unless otherwise noted.