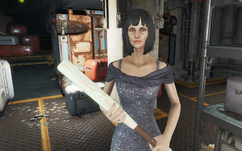 Darla is a rather young woman with a violent streak and a love of "bad boys." She left her home in the wasteland to become Skinny Malone's gun moll (female accomplice to a criminal), leading her parents to mistakenly believe that she had been kidnapped and to hire a detective (Nick Valentine) to retrieve her. Nick successfully tracked her down to Vault 114 but was caught and kept locked away in the overseer's office.

When Skinny Malone confronts Nick Valentine and the Sole Survivor during their escape from the Triggermen's headquarters in Vault 114, he is accompanied by Darla and two other Triggermen. Darla urges violence, while Skinny wants to handle the situation his own way.

Retrieved from "https://fallout.fandom.com/wiki/Darla_(Fallout_4)?oldid=3345814"
Community content is available under CC-BY-SA unless otherwise noted.