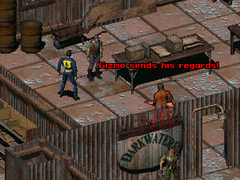 Kenji's assassination attempt on the mayor of Junktown!

Darkwaters General Store is a shop in Junktown run by the mayor himself, Killian Darkwater.

The Darkwaters General Store was founded by Killian Darkwater sometime after his grandfather founded Junktown.

Killian will trade with the Vault Dweller and there are items located around the store which can be taken and a safe to be cracked. Killian's locked safe when picked grants an additional 500 XP, and over 2,000 caps.

While hanging around the store, a "shady gunslinger" walks in and tries to assassinate Killian (even though he employs three Junktown guards). After surviving this attempt on his life Killian will initiate the quest to get Gizmo's confession, as well as give the player character two unique quest items.

Darkwaters General Store appears in Fallout and also mentioned in the Fallout Bible.

Scout Handbook
Add a photo to this gallery
Retrieved from "https://fallout.fandom.com/wiki/Darkwaters_General_Store?oldid=3419352"
Community content is available under CC-BY-SA unless otherwise noted.