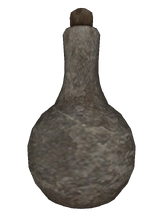 Dark datura is a venom that causes periodic double vision and blurring while the player character is under its effects. This type of venom is favored by the White Legs, likely due to its powerful properties and due to the availability of its ingredients in Zion.

The dark datura bears a strong resemblance to the real world Datura wrightii, colloquially known as "sacred datura root," which upon consumption results in hallucinations and sensory distortions. Similar to the in-game effect, these hallucinations manifest in considerable degradation of visual acuity, often to the point of functional blindness.

Sometimes, even after applying the antivenom, the blurred vision effect may persist. [verified]