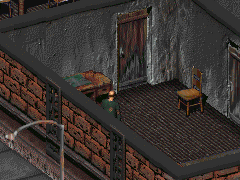 “I always enjoy strangers coming into my home and giving me money.”

Daren Hightower is the head of the Water Merchants,[1] residing in the Heights district of the Hub around 2161.

A reclusive and paranoid man, he employs a private army of bodyguards to stave off threats, both real and imaginary. His role as the head merchant of the wealthiest caravan company in the Hub led to him and his wife being marked by Decker for termination and his household a lucrative target for Loxley.

Daren has a wife, an equally erratic and paranoid woman.

It is unlikely for Daren to be welcoming to the Vault Dweller. Depending on dialogue choices, they can find themselves kicked out of the building or being shot outright.

Daren Hightower appears only in Fallout.

Retrieved from "https://fallout.fandom.com/wiki/Daren_Hightower?oldid=3356205"
Community content is available under CC-BY-SA unless otherwise noted.